Skip to content
It was March 2010. Bobby Ghassemi had been driving fast along a winding road in Virginia when his car barreled off the road. By the time paramedics arrived, he was in a coma and barely alive.
READ THE FULL STORY HERE: https://edition.cnn.com/2012/10/19/health/fish-oil-brain-injuries/index.html
“For all intents and purposes, he was dead on the scene,” said Dr. Michael Lewis, a physician who later advised the family. “I’m looking at the reports, and they report a Glasgow Coma Score of 3. A brick or a piece of wood has a Glasgow Coma Score of 3. It’s dead.” 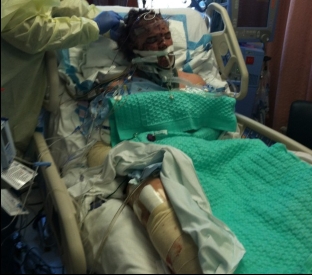 Ghassemi was airlifted to a hospital. For the first three days, it was touch and go.
Ghassemi’s brain was so engorged, doctors needed to relieve the pressure by taking out a portion of his skull. He also had what is called diffuse axonal injury: bleeding that suffused nearly every part of his brain.

“His doctor said to me, ‘Listen, he has survived. It is a miracle that he lived, that he made it,’ ” Marjan Ghassemi said. ” ‘If he comes out of the coma … I don’t know if he’s going to be a vegetable for the rest of his life or whether he’ll remember anybody.’ “

Ten days later, as Bobby lay comatose but stable, his father, Peter Ghassemi, was sick of waiting and desperate for an intervention. After a series of phone calls to friends, he ended up speaking with Lewis, an Army colonel and doctor.

After some discussion, Lewis proposed something that Peter Ghassemi had never heard about for traumatic brain injuries: fish oil.
At that point, Peter Ghassemi was open to anything.

“Every minute passing was hurting my son … because they weren’t really doing anything to help him besides keeping him alive and stabilizing all of his vital signs,” he said. “If there was a chance to improve, I wanted it to be done right then.”

Fish oil — which is composed of omega-3 essential fatty acids, also found in the brain — had been used only once before to treat a brain injury as devastating as Ghassemi’s. That was in 2006, in the case of Randal McCloy, the sole survivor of a mine disaster in West Virginia.
McCloy, 26, was trapped in a mine for 41 hours while the air around him and 12 other miners filled with noxious methane and carbon monoxide. By the time he was pulled from underground, he had had a heart attack, was in liver and kidney failure and had a collapsed lung, according to his doctors.
His brain was also riddled with damage from the carbon monoxide and methane.
McCloy’s prognosis was not very different from Ghassemi’s. According to his neurosurgeon at the time, Dr. Julian Bailes, restoring McCloy’s normal brain function was truly a long shot.

“Randy was really on death’s doorstep,” said Bailes, now co-director of NorthShore Neurological Institute in Evanston, Illinois. “He was really in dire straits.”
Like with Ghassemi, once McCloy was stabilized, there was little doctors could do to stem the tide of inflammation and cell death occurring in his brain.
But Bailes and other doctors on McCloy’s team resisted the “wait and see” course common in these types of cases and began an unorthodox treatment regimen, including hyperbaric oxygen treatments and high doses of fish oil.

“The concept was then trying to rebuild his brain with what it was made from when he was an embryo in his mother’s womb,” Bailes said.
That’s the theory behind using omega-3 fatty acids to heal brain injury. The human brain, which itself is a fatty mass, is about 30% composed of omega-3 fatty acids, according to Lewis.

In his words, high doses of omega-3 fatty acids, since they mirror what is already in the brain, could facilitate the brain’s own natural healing process.

“It really gets down to what I would call my brick wall analogy,” Lewis said. “If you have a brick wall and it gets damaged, wouldn’t you want to use bricks to repair the wall? And omega-3 fatty acids are literally the bricks of the cell wall in the brain.”
Most of the studies about omega-3 for traumatic brain injury are in animals, but they indicate potential for healing the human brain.
After a trauma, the brain tends to swell, and the connections between some nerve cells can become damaged, while other cells simply die.
National Institutes of Health research suggests that omega-3 fatty acids may inhibit cell deathand could be instrumental for reconnecting damaged neurons.
Another recent study revealed genes that are activated to contain massive damage — especially inflammation — when the brain is injured. What activates those genes: omega-3.
“We have strong data that suggest omega-3 will activate good proteins to cope with brain damage and turn off proteins that cause neuroinflammation,” said Dr. Nicolas Bazan, director of the Neuroscience Center of Excellence at LSU Health in New Orleans and author of the study.
READ THE FULL STORY HERE: https://edition.cnn.com/2012/10/19/health/fish-oil-brain-injuries/index.html